I guess for most of the solo travelers there comes a time when one feels drained and needs to energize to continue the travel to Punjab. The same happened to me but too soon, I didn’t expect it at all. So it was time to move to a friend’s place to refuel myself. I was riding from Rusirani village via Alwar to Delhi. The ride was amazing, considering I was going up and down the mountains. Some stretches were really bad and took some serious concentration but overall it was a great ride. The most hated part of the journey was the Gurgaon Delhi expressway. Horrible traffic jams and never imagined Delhi was so polluted.

I had a week to recover and meet friends before my journey up north to Punjab. Thanks to Rahul and his roommates we watched movies, partied and had great time together. I planned to work again but was not expecting any internet connectivity further in the journey. So, I thought of applying for all alternative PhD positions and Research Assistant positions abroad if my applications get rejected.

As far as my next destination, I open up couchsurfing app checked for a place at around 300 km radius from Delhi on the way to Dasuya village (Punjabi couple who invited me). Ideally Patiala (also known for Patiala peg) was one such town I was looking to stay as I am not into cities. I sent messages to couple of people in Patiala, just 4-5 days before my travel. I was also taking a chance by sending messages to people from Ludhiana, if the hosts from Patiala are busy. I started getting acceptance instantly after 1 days. But there was one message which came instantly written “Sure Bro”, it was from Sim. I read his profile again and I instantly decided that I was going to his place. He was a traveller himself, so it was not a hard decision for me as I could get to listen to their stories. I got a couple of other requests as well. When I told them that I already committed to my host. They were pretty cool about it. They gave their numbers just incase I was free to catch up for a meal. I already started feeling the Punjabi love.

On Feb 26th, I started my ride from Delhi at 10 am to Ludhiana. After an hour-long manoeuvring in the Delhi traffic, I managed to reach the NH1. One of the awesome roads I had seen so far. 4 lane roads with free-flowing traffic. After taking couple of tea and pee breaks, I reached outskirts of Ludhiana. Sim (couch surfing host) instructed me to call him at a checkpoint. fter following his directions and entering into the city I met him at the Bhagat Singh, Rajguru and Sukhdev statue. I was waiting there and checking my messages suddenly a guy with 700cc bike comes in front and instructs me to follow. I followed him for some distance and we stopped at a place where there was less traffic. We introduced ourselves and he instructed me to just be at his tail end. I have reached their home roughly at around 5:30 pm and met his family. He had two guest rooms for travellers and the room was awesome. After a quickly freshening up, we had a tea and a long introduction. We shared our travel stories and had long discussions. He shared his couchsurfing experience and he really loves hosting people.

Sim is basically does business in the Automobiles industry. His love for bikes speaks for itself. Sim is definitely a brother from another mother. He and his family are the best people I have met on Couchsurfing. A perfect family man, left his job and decided to come back to Ludhiana when his father retired. He knows how to keep everyone happy and comfortable. He is a traveller, likes to explore new things. Further, he planned for a backpacking trip to Europe with his son (Karan) in the summer. I think he will have finished his trip before I publish my blog post.

His family is really welcoming and in one word “awesome”. I had a nice long discussions with Babuji (Sim’s father) starting from Punjabi culture to current state of politics. As he worked in the Railways Planning team, he had a lot of insights about the work culture inside government offices. He shared stories about various projects he took up during his tenure. He specifically mentioned about a project he took up in Ludhiana which saved crores for the Government. Karan (Sim’s son) took me to play a football match with his friends on the next morning and we had a gala time together. Later in the day, Sim and Karan took me to their village to show me their farms and we met their relatives. We also went to Mehdiana Sahib where the sculptures depict Mughal’s torture on Sikhs. It was amazing to hear about the sheer will power of Sikhs. Do watch “Chaar Sahibzaade” which is an animated depiction of what happened during the Mughal reign. It was an awesome bike ride and finally to end the day on a high note, we went to a nice brewery to have a couple of beers. 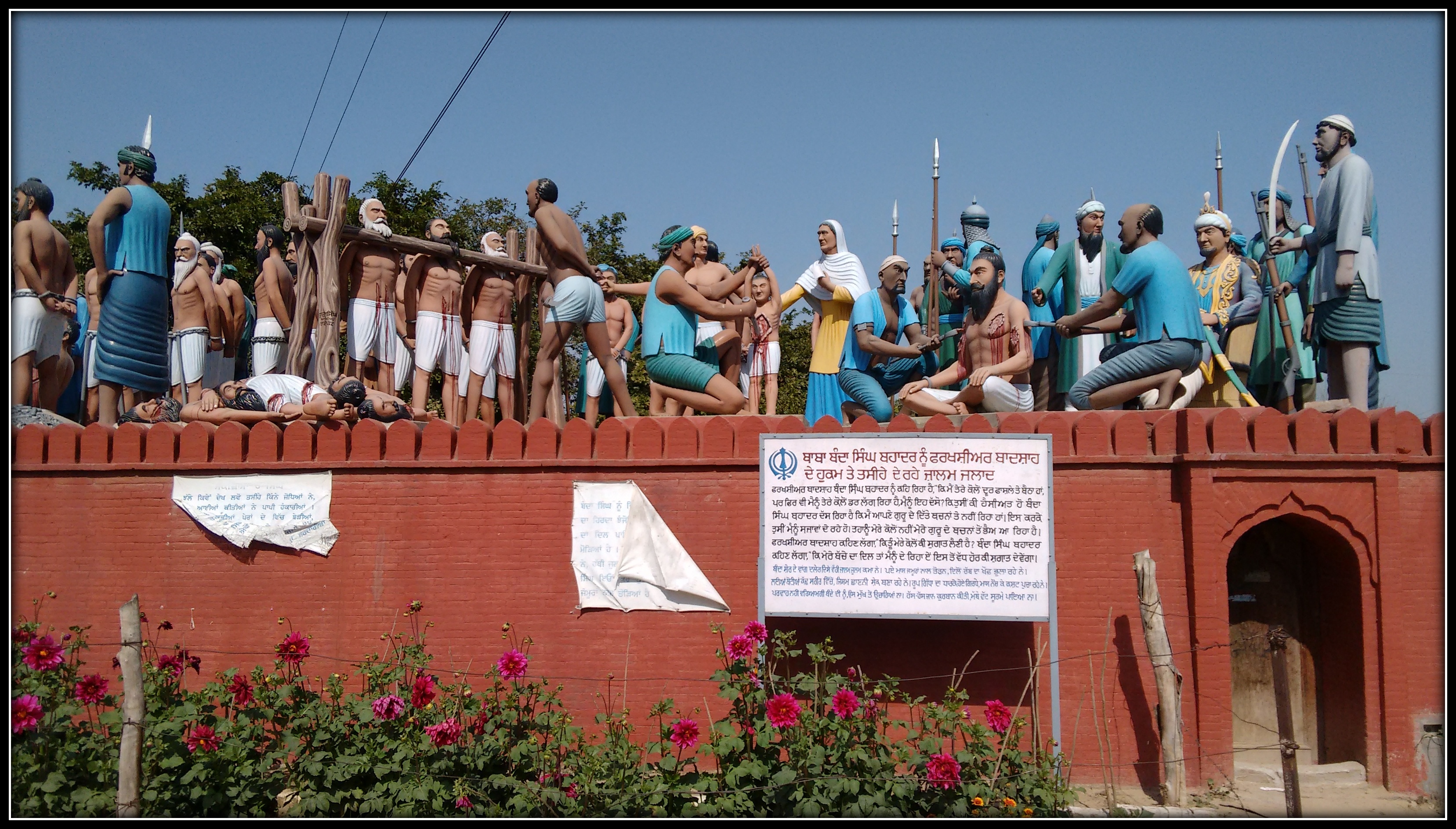 The cruelty of the Mugal's over Sikhs at Mehdiana (Punjab)

I really did not feel as an outsider, I felt was as if I came to my relatives house. I told Sim many times that he was just like one of my uncles. I would like to see myself as Sim - “The perfect family man one day. The friendly nature of the family, the awesome food by Bhabhiji and great hospitality of Sim scores 10/10 for being a lovely host. I would love to host him where ever I am. We had a plan to travel to Bali together 🙂

For some lovely pictures: (link)