After a great stay at Sim’s place in Ludhiana, it was time to move to the next destination as per the plan i.e. Chandidas village near Dasuya, Hoshiarpur. After having tasty Aloo Parathas from Babhiji, I hopped on my bike and started the shortest ride of my journey (120 km). It was a nice journey through the fields and the surrounded by trees on both sides of the road. I saw some riders on the way going towards Manali which gave me an option for my next destination.

Meanwhile, I called up my hosts and informed them that I would be arriving for a late lunch. I reached the Dasuya village and tried to contact them, but strangely could’t reach them due to network issues. So, I typed in Chandidas village on google maps and started riding towards it. I remember Jaswinder bhaisab showing me his house on Google maps and told me it’s next to a Gurudwara. I reached the Gurudwara with the help of the locals and tried calling my hosts. This time around I could get in touch with them and informed them that I reached the Gurudwara. They were surprised to see the accuracy of Google maps. Bhaisab came to the Gurudwara and guided me to their house. I felt like Shahrukh Khan from Swades were the kid’s guide him to their house. The only difference here was instead of a caravan it was my bike. I took of my ninja gear and took the blessings by touching the feet of the elders, Bully aunty and Jaswinder bhaisab. It is a custom I have been used to since my childhood and it also works like a charm as a first impression 🙂

I met Bulli aunty and Jaswinder bhaisab in Rajasthan during my friend’s marriage. My first interaction with them was really funny as I asked Bhaisab if Bully aunty was his daughter and everyone started laughing. Sometimes, however curious you might be it is always better to wait before asking a question :). From then on, I started calling him Bhaisab and his wife aunty to redeem myself :). As you might have known from my earlier entry that I happened to stay longer at my friend’s wedding and during this time we became closer. That is when they invited me to their village in Punjab. I asked them if they had any special event in their village which I could visit and they said there is a yatra (journey) which happens from their village in March. I instantly said I would see them in March then. I have a theory, to know the culture the easiest way is to attend some event (festival, weddings, local celebrations). It works mainly because people are really happy celebrating it and it is a perfect time when people would be excited to share about their culture.

Some how I always had the perception about the Punjabi families that they were a happy-go-lucky type of families (“khate peete families” – love for food and party) (Courtesy: Bollywood movies). They have interesting nicknames “Jassi”, “Happy”, “Lovely”, “Ruby” and I really don’t know how they come up with these nicknames. Surprisingly, girl and boy names are similar except for the endings. If it is a boy it ends with a Singh and for a girl it is Kaur (this rule works most of the times). The most important thing in their life where they don’t compromise is the “Food”. Paratha with makkhan (butter) and with a big glass of lassi is the most popular combination. My stomach was full all the time and I had to prepare myself to say no because they always fed two servings more after saying enough. Most of the Punjabi’s are religious, following Sikh or Hindu traditions. I knew about the religion before but I got to know their belief system when I stayed with them. Of course it did not change my ideologies of being an Atheist but will talk about it in detail in my next blog post. 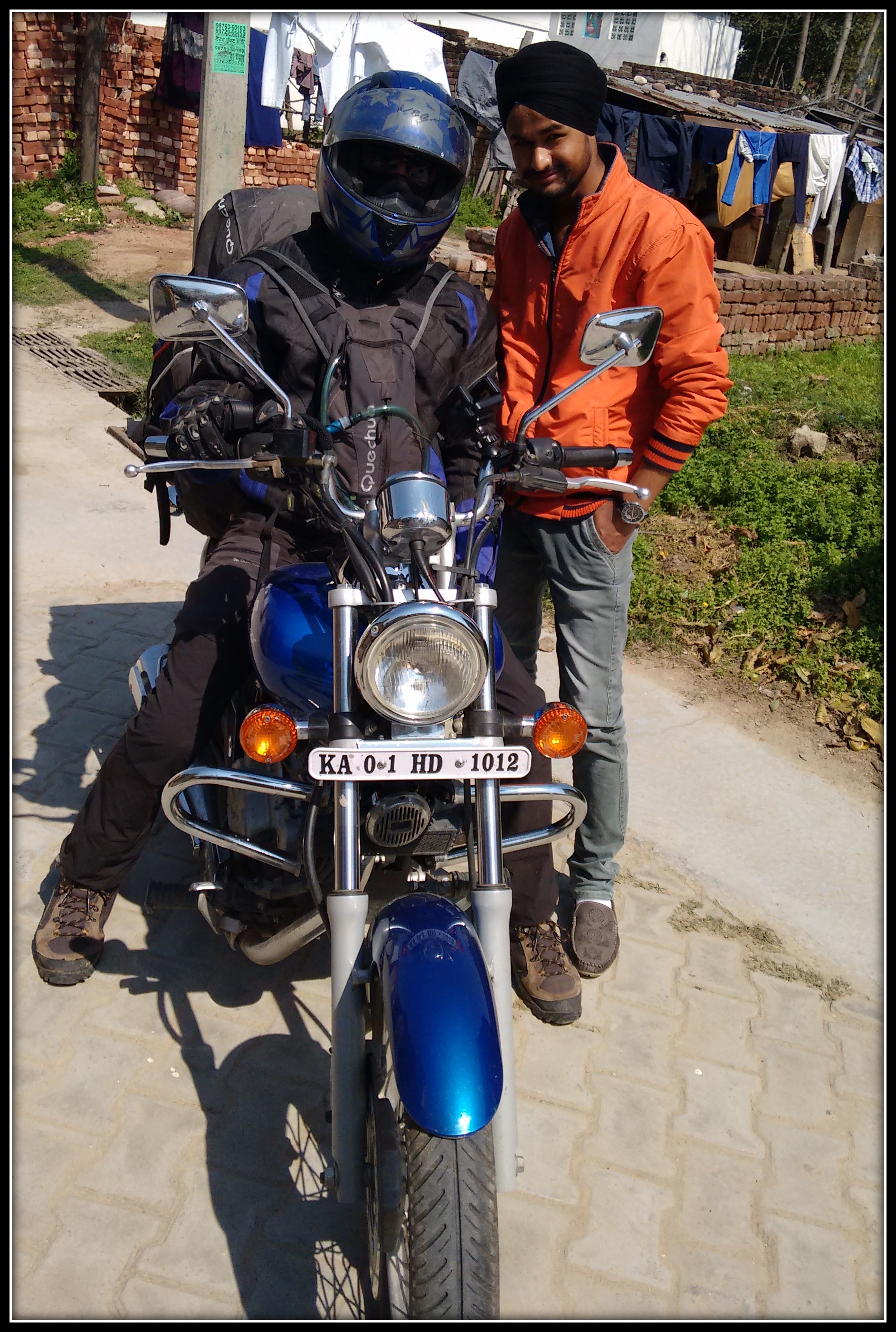 In my ninja gear with Lovely

Initially my hosts were a bit skeptical whether I would be okay to stay at their place and whether I would like the place. After a few days they told me about their first doubts and my reply was “as long as you have a small place for me to sleep, I am fine with anything”. As a traveller, I have always been okay with anything (no toilets -> no problem, find a spot in the nature and bury your deeds :)). I don’t mind if I get any facilities or not, as long as one gives me love and affection, I am a happy man at the end of the day. I always tell my hosts not to do anything special for me and always tell them to treat me as one of their own instead of a guest. Being a guest comes with a lot of responsibilities :D.

I like the village life for it’s peaceful and scenic beauty. I did some unusual things which I usually don’t get to do. I showered outdoors and saw the cows enjoying the my naked view, slept on the foldable beds called Charpai, brushed teeth with bush branches, pumped water from the hand pumps for shower and morning strolls between the fields, rode 3 people on my bike for long distances inside the village (this was the exact feeling as in Swades :)). 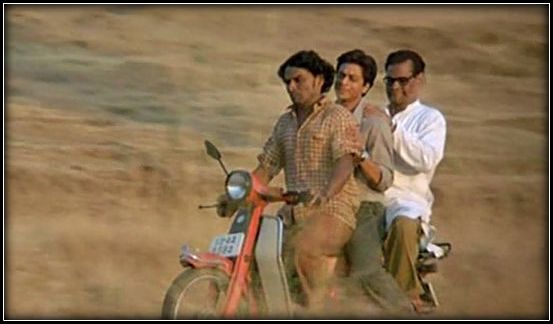 My so called Swades feeling

I also bonded really well with the kids as I was free for the day (thanks to the bad internet connectivity). I played badminton with kids and taught them some cool tricks in math. I just loved the way people treated me. They didn’t know anything about me and they treated me like a simple common man. I really liked this feeling, which I missed in my great grandfather’s village, where I was always treated as a great-grandson of the village head. aOur roots are from a village but somehow having stayed in the city for a long time, I really missed the beauty of a village life.

I was quite lucky that my hosts took me to various historical places mainly Temple and Gurudwaras. It was really nice to know the history and understand their beliefs. We also visited lot of their relatives and everyone treated me like one of their own. Most of the people asked me how I managed to come there on a bike.

Overall, I started loving the love and affection of Punjabi families. I was lucky for being treated as one of their own and I am sure I will visit them back sometime again.